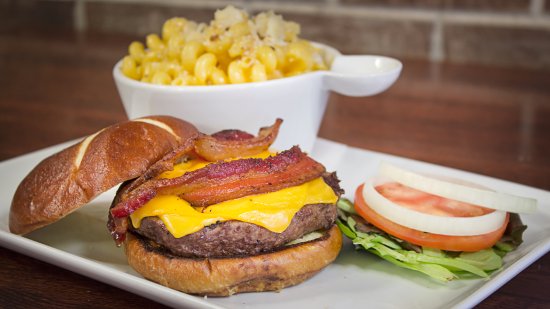 Can I make a Cheeseburger with a side of mac-n-cheese with under 20 carbs? I don’t mean some crappy bun that isn’t bread, or some crumbly dry burger and I definitely don’t mean zoodles and cheese (though zoodles are pretty awesome).

With my latest health news (for those who didn’t know… I was diagnosed with Type II diabetes, high blood pressure and high cholesterol, fun times), a lot had to change, and it has! For one, I walk 5 miles a day now. We are completely revamping and rethinking our food. Some changes (and our changes are subject to change as more research is done!):

What’s this got to do with the photo of a burger and mac-n-cheese? Well, that’s my food goal. To make that exact scenario, but make it healthy AND taste good.

Now I know many are saying it can’t be done (psst, it totally can!) and some are saying, “If you’re changing your food, change the way you think about food and you won’t need to recreate things.”. They are absolutely right. But, it’s an experiment, and it gives me a goal and something to work toward. You see, I’m a tinkerer in the kitchen. I love testing this or that to see what happens. I know I can create a decent bun that’s low in carbs. I know I can make a decent pasta too. Burgers are a little more demanding, but I think I’m on the right track. To me, the puzzle and challenge of creating these things is almost more important than the eating and enjoyment of it. Just to know I can do it is what I’m after. Will we eat that sort of thing all the time? Oh hells no. But it’s nice to whip that out once in a while just for fun or to blow the minds of carnivore carblovers.

The one thing I was going to miss was ravioli. I feared that pasta, really good texture and flavor, wasn’t going to be possible. I’d read the nutrient content of whole wheat flour vs white wheat and was shocked that it was really just a few grams of fiber that separated them for carb load. Well, there’s more than that. Carbs don’t exist in a bubble. All the nutrients that are removed by the process of making white wheat make up for the carbs in whole wheat. If you’re gonna eat carbs, make them count. Whole wheat flour does that. That was one shocking revelation that happened just today.

We do a lot of research and are finding contradicting information. For example, some doctors and studies say some red mead is fine, and poultry is totally good for a diabetic heart healthy diet. Others say ALL meat is bad. There’s more to that story. Eating a lot of meat IS bad for diabetics and everyone in general. I’ve found my acid reflux is worsened by meat, so that’s a big impetus for us to cut out meat. I love meat and the texture though, so I’m working on meat replacements to make up for that. so far, so good!

Other doctors and studies say oatmeal is GREAT for diabetics. Well, it’s carbs, almost pure carbs. How is that good? Fiber and nutrients. The problem with oatmeal is… who eats it plain? Put fruit in it and BAM, sugar. My glucose tends to be higher in the morning for some reason (seeing the Doc soon) so for me, having oatmeal and/or fruit in the morning is a bad idea. Glucose on high glucose is bad, so we opt for proteins for breakfast. Eggs for example.

Even eggs get demonized and the information is contradictory! One will say eggs are GREAT for diabetics due to no carbs, but others will say they are animal proteins and BAD for diabetics. It’s all very confusing. The best information I’ve found says 6-12 eggs per week is fine, more is bad. By the way, the idea that eggs are bad for cholesterol is mostly debunked. Dietary cholesterol from food isn’t what raises cholesterol in your blood, that’s your liver. The liver creates cholesterol and it’s necessary in certain quantities for proper bodily function and repair, but things like trans fats trigger the production in the liver, not eating high cholesterol in your foods.

So, while I might not be craving burgers and steaks and pasta and pizza, I can still eat some of those things in moderation and with some tweaks to the recipes. Food just got even more interesting.

Thanks for reading, and have a great day!

4 thoughts on “Food Goals – Not what you think!”