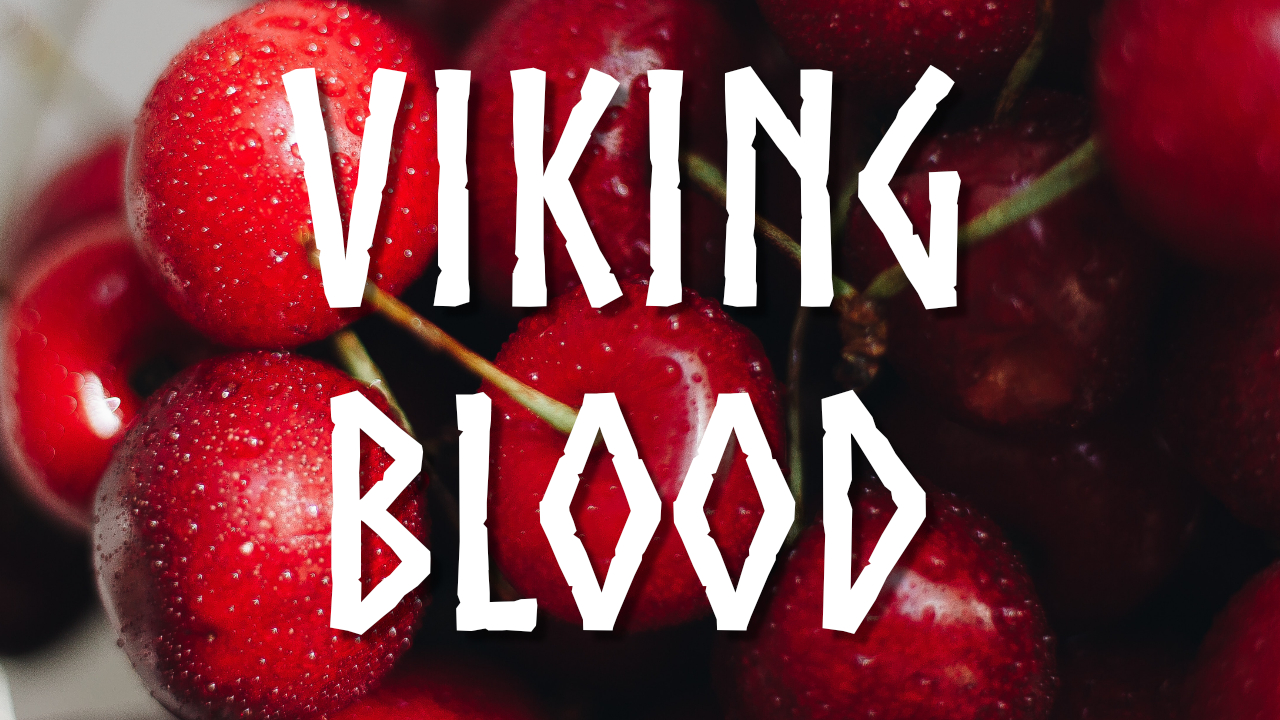 So what is Viking Blood anyway? It’s cherry mead, or cherry melomel. That’s all. This is a VERY old concept and not to be confused with Dansk Mjod “Viking Blod”, which is from the 1700’s and is hibiscus mead that is hopped and fortified with neutral spirits (yep, they do that, really).

True Viking Blood Mead is from somewhere around the 1300’s, and the details are rather sparse and sketchy. All we really know is that it’s cherries and honey, in some proportion, with water. Not a very auspicious beginning to this highly touted mead recipe, right?

Scouring the internet, we find quite a few videos, articles, etc, and even a commercial product or two, and they all are indeed, cherry mead or cherry melomel (melomel is the name for a mead made with fruit).

But.. why name it so? Why is THIS particular fruit, the cherry, worthy of such a moniker? All good questions and the answers are probably lost to history, but we can pontificate!

First, it’s red, so humans are reminded of blood. I know, lots of things are red, but stick with me here, there’s a point somewhere.

Second, someone probably thought naming it with the word, “Viking” made it sound cool. Yes, people in the 1300’s wanted to sound cool just as much as we do in 2020. Marketing was still important back then and if your product conjured ideas of pillaging and plundering from a longship then kicking back with a horn of a drunk-making beverage that looked like the blood of your enemies… well, you might sell more.

Thirdly, well… putting those words together, “Viking Blood”, made it unique and mysterious, and yes, I know this is just an elaboration of the second reason, but it’s my article so I’m going there. I’m fairly certain if they said, “Cherry Mead here, get yourself some cherry mead!”, it wouldn’t go over as well as, “VIKING BLOOD! Get some VIKING BLOOD here!”. You see, the 1300’s were well over two centuries AFTER the Vikings were no longer a thing. Therefore, it’s a bit of a rebellion to drink their blood, a bit of a slap in the face to what were considered essentially Pirates of their day, and well feared and reviled by anyone living where they might have plundered and pillaged. Ironically, some of those people in those areas now probably had Viking Blood in their veins, the real kind, not mead, since the Vikings were known to settle and populate areas too.

And so, Viking Blood gained publicity and fame, and spread throughout areas where people drank mead. Which… included not only the Scandanavian lands, but most of Europe and, well… everywhere. Logically speaking though, anywhere that Viking was a known term, would make sense that this marketing scheme was popular. In areas outside the sphere of influence of the Vikings, it’s probably just cherry mead and not nearly as popular.

And so… my theory, based on logic and research is that some upstart mazer in the 1300’s sought to capitalize on the name “Viking Blood” and started making a living selling it, likely much to the dismay of EVERYONE ELSE selling Cherry Mead and merely calling it… Cherry Mead.

So, in summation…. Viking Blood is Cherry Mead (or melomel if you’re being sophisticated and like making people say, “Wut?”), the name was coined sometime in the 1300’s by people who were not Vikings. In all likelihood the Vikings didn’t know it by that name, but… they most likely made and drank Cherry Mead since… they made mead, liked adding fruits and berries to their mead… and cherries were grown in the areas they called home long before Viking Blood was a thing.

I need a glass of mead. Thanks for reading and as always, have a great day!

If you’d like to learn to make your very own VIKING BLOOD mead, we did a video on this!