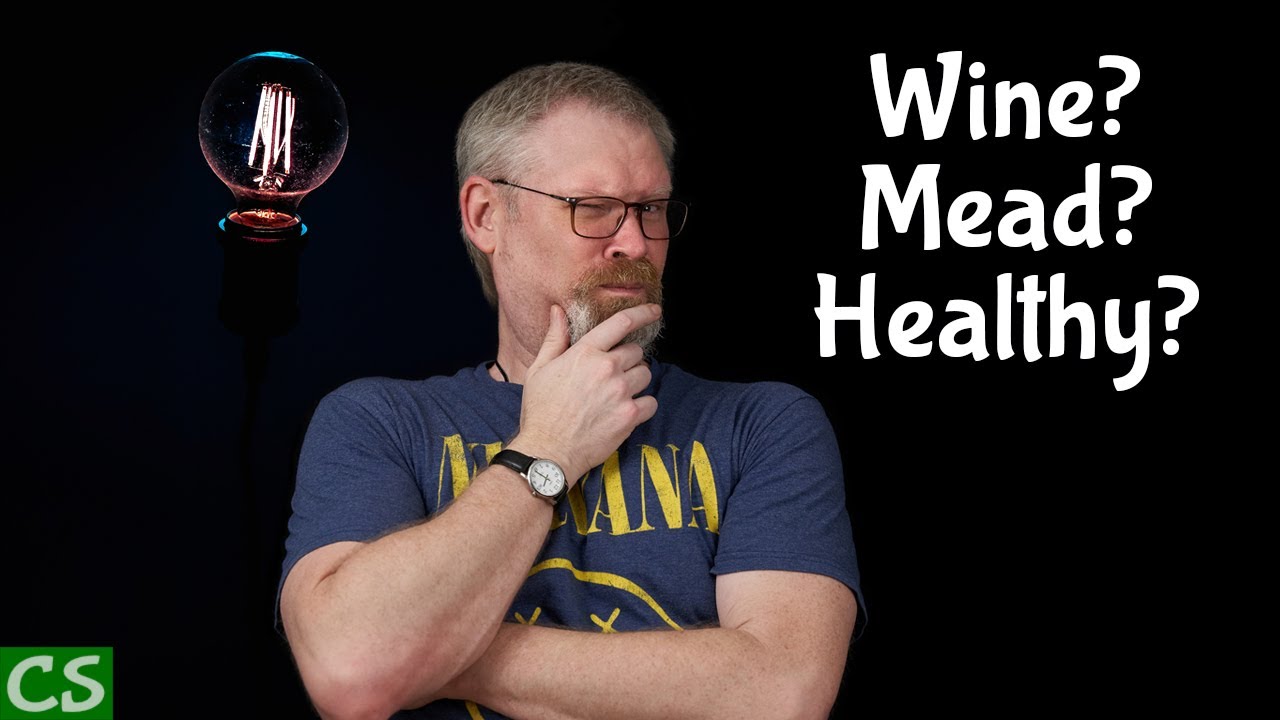 Well… yes! So long as you do it right. Wine and mead contain probiotics just like kimchi and sauerkraut, and probiotics are incredibly important!

So, as promised, here is the research I did in it’s entirety with links to the sources. This is also sort of the script I read from in the video. Of course, I don’t do scripts, so I sort of worked from it!

Probiotics and Gut Health in Wine Cider and Meadmaking

I want to point out that what I’m talking about today isn’t meant to be fear mongering, or simply an opinion. I researched this and everything said today is fact, from scientific studies and research papers written by experts in the field. Something interesting to note is that while I found a lot of supporting evidence for what I’m about to say, I found no evidence claiming these statements are untrue.

Acetaldehyde is a fermentation byproduct that increases intestinal permeability and makes you feel hungover. During the final steps of fermentation, though, yeasts use up acetaldehyde as fuel, and bacteria break it down. We recommend waiting until all fermentation has stopped before racking your brew. Like in our video “Racking too Soon”, however this just gives another good reason to not rack too soon.

I’ve heard, and this is anecdotal, rather than proven fact that people claim they get less hangovers from homebrew and homemade wines than from commercial ones. If they follow the same guidelines we do, then it’s possible this is why.

2) Don’t filter. We’ve talked about why you shouldn’t use coffee filters for filtering, but, this research says filtering in general is a bad idea. You see, removing the lees, you’re also filtering out the good microbes in the brew. Commercial wineries often filter their wines to remove all traces of sediment and yeast. When they do, they also remove what are known as probiotics, which are really important and good for you. Probiotics like pediococcus pentasaceus, a bacterium that attaches to the intestinal wall and protects you from pathogens like e. coli. Wines also contain lactic acid bacteria with similar probiotic effects to fermented foods like kimchi and sauerkraut as well as other probiotics that reduce gut inflammation. Filtering removes all the good stuff from our brews, as well as some flavor too. There’s no way to filter without losing some flavor, that’s just part of what filtering is.

3) Don’t add sulfites and sorbates to your brews. A lot of people will tell you that you HAVE to use these things to stabilize your brew. While they are both preservatives and will indeed stabilize wine cider and meads, they are simply not necessary for a home brewer. Commercial wineries probably do it to speed production, ensure safety during long transit and variable temperatures during transport, and other factors that a home brewer simply doesn’t need to worry about. Also, contrary to popular opinion, they are not 100% guarantees against a ferment restarting. Over time, it can still happen if the brew wasn’t ready to be bottled. The only real way to stop fermentation is through pasteurization.

Sulfites and sorbates kill bacteria and other probiotics in the fermentation, thereby eliminating any “good gut flora” that might have been there. Of course, pasteurization does this as well, thus, we only recommend it when needed, such as a carbonated sweet brew.

The difference here is that while pasteurization kills the probiotics, that’s all it does. Adding sulfite and sorbate will actually affect your body when you drink it, as those preservatives will kill or retard your own gut flora, thus, pasteurization is a much better way to go if you have to stop or prevent fermentation. I still would avoid it unless necessary.

Why is affecting your gut flora bad?

US National Library of Medicine

Many inflammatory, autoimmune, metabolic, neoplastic, and neurodegenerative diseases are associated with compositional and functional alterations of the gut microbiota, known as dysbiosis.

Recently, several groups, including ours, published research demonstrating that food additives can alter gut microbiota. Tests showed a decrease in the variety of gut flora in lab mice when treated with humanized biotics and given food preservatives.

The aim of this work was to test the hypothesis that antimicrobial food additives may alter the composition of human gut microbiota by selectively suppressing the growth of susceptible gut microbes. To explore the influence of antimicrobial food additives on the composition of the human gut microbiota, we examined the susceptibility of both aerobic and anaerobic gut bacteria to sodium benzoate, sodium nitrite, and potassium sorbate, and their combinations, using a broth microdilution method. The tested bacteria exhibited a wide range of susceptibilities to food additives. For example, the most susceptible strain, Bacteroides coprocola, was almost 580 times more susceptible to sodium nitrite than the most resistant strain, Enterococcus faecalis. However, most importantly, we found that gut microbes with known anti-inflammatory properties, such as Clostridium tyrobutyricum or Lactobacillus paracasei, were significantly more susceptible to additives than microbes with known proinflammatory or colitogenic properties, such as Bacteroides thetaiotaomicron or Enterococcus faecalis. Our data show that some human gut microbes are highly susceptible to antimicrobial food additives. We speculate that permanent exposure of human gut microbiota to even low levels of additives may modify the composition and function of gut microbiota and thus influence the host’s immune system. Whether the effect of additive-modified gut microbiota on the human immune system could explain, at least in part, the increasing incidence of allergies and autoimmune diseases remains to be shown.

Department of clinical immunology and allergology, Faculty of Medicine in Hradec Kralove, Charles University in Prague

There is an accumulating evidence that gut microbiota play an important role in the induction and maintenance of various allergic, autoimmune, metabolic diseases and cancer [1,2,3]. The ratio of beneficial (anti-inflammatory) versus harmful (pro-inflammatory) microbiota seems to play a central role [4]. The composition of gut microbiota is influenced by genetic and environmental factors. The single most important environmental factor is diet [5].

A preservative is naturally occurring or synthetically produced substance that is added to food to prevent microbial growth or undesirable chemical changes. Preservative food additives can be used alone or in combination with other methods of food preservation. Preservatives may be antimicrobial preservatives, which inhibit the growth of bacteria or fungi, including mold, or antioxidants, which inhibit the oxidation of food constituents. Common antimicrobial additives include sorbic acid and its salts, benzoic acid and its salts, potassium sorbate, calcium propionate, sodium nitrite, sulfites and disodium EDTA.

In short, it has become increasingly difficult for a person to acquire adequate commensal microbiota from food, and the significant changes in diet in recent decades may be the cause of the convergent evolution of the gut microbiota in the modern urban population (De Filippo et al., 2017; Derrien and Veiga, 2017).

The College research found that sulfites in food preservatives killed or inhibited the growth of the good bacteria when tested at levels generally regarded as safe by the FDA.

As always, it’s your choice, and it’s your brew. Do your own research, find your own best practices and above all, make tasty brews that you like to make. We’re here to help.