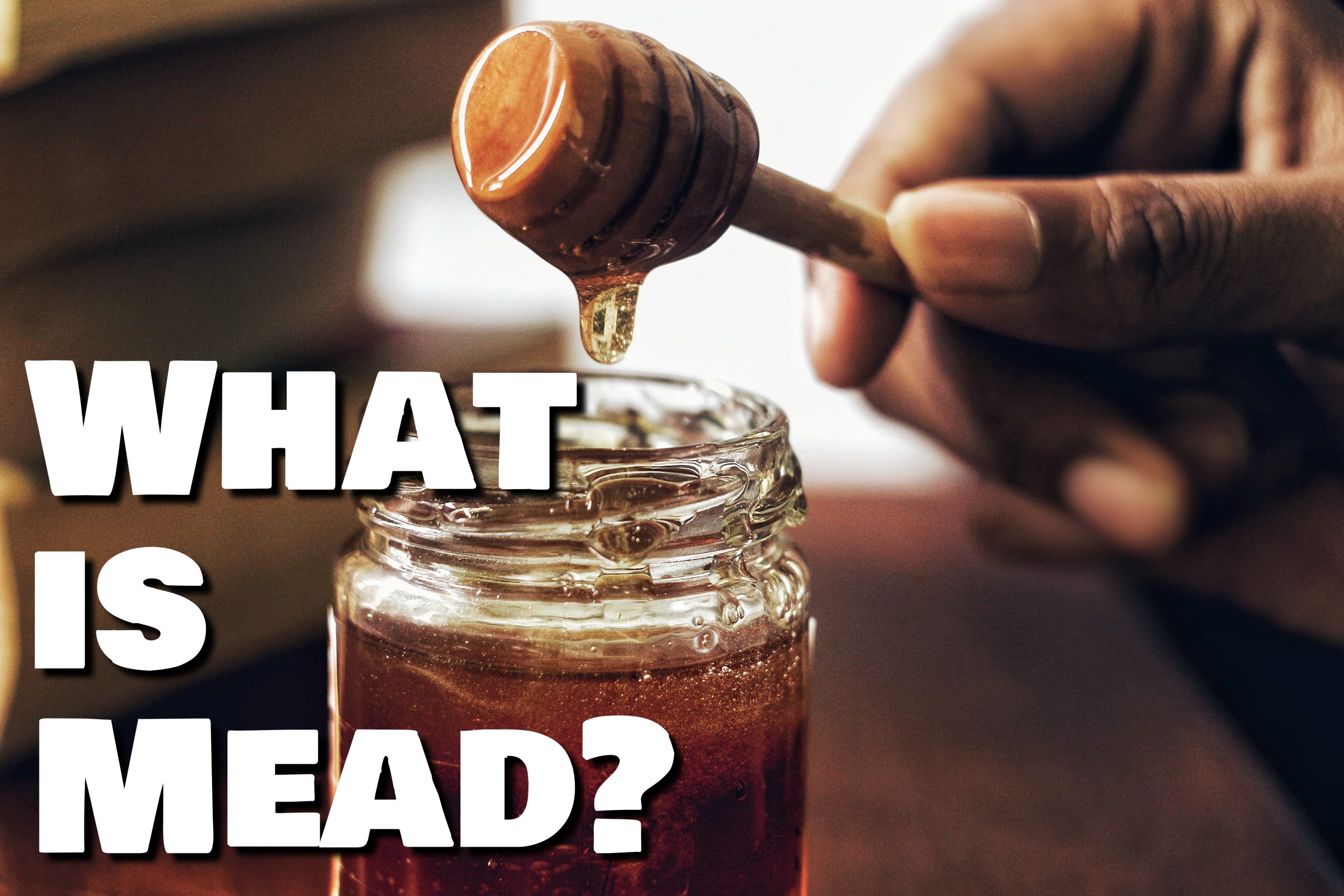 Easy. Mead is an alcoholic beverage made from fermented honey. Some call it honey wine, which is sort of redundant. There. That’s what mead is. We’re done here, and you can go about your business as usual.

Bear with me here. Mead is fairly simple when viewed from the outside, but it becomes an onion or ogre as you delve deeper. It’s got layers.

Firstly, mead is one of the oldest man made alcoholic beverages. Before anyone argues that beer is older, I refer you to my previous sentence, where I said “one of the oldest”. Beer and wine are up there too and I’ll let the archaeologists fight over which is oldest. However, I’ll input my opinion, based on logic (I know, right?) and say mead and wine are likely the first things humans brewed on purpose.

Here goes. So, to make beer, you need barley, and that needs to be malted, or germinate. that means it’s got to sit longer than it should in moist conditions. Early humans would have tried to avoid this as they would know it can spoil if you do this. But, for the sake of example… let’s press on! Then, this barley has to be heated a bit, mostly not past 130f to 140f for the barest of reactions to begin (which could happen if stored together, since the rotting process does give off heat, but also sun can heat enclosed areas to those temps). So.. thus far, we have barley that was mistreated in several ways to get to this point.

Once it’s malted and the enzymes are activated by heat, the starches in the barley start to convert to sugar. However, if we don’t stop the malting process somehow, it will simply grow and consume all the starches and sugars anyway unto itself since that’s why they are there in the first place.

So, we have to have an intervention.

Heat is the usual method for halting malting. Then… those sugars have to be in water, so maybe a barrel of barley was left out too long, heated in the sun, then dried out, and got rained on, producing a wort. A weak one most likely, but a wort. Wild yeasts in the area or on the barley could take hold and ferment it to beer.

Now.. for wine. Let’s say a piece of fruit fell from a tree, and began to overripen. As this happens, the wild yeast already present start to ferment the readily available sugars in the fruit. Someone picks it up, and eats it (hey, it can happen). They feel… funny. And they then pick more fruit and squeeze the liquid out, to drink.

Going further, they might even juice the fruit and let it sit to ferment, which… is exactly how you make wine.

On to MEAD, finally.

Let’s say a person comes across a beehive. They know bees make honey, but this one is situated in a way that it collected water. The honey is looser than usual and when eaten makes them feel… funny.

Going further, they collect honey and put it with water, to promote the process.

So, logically speaking, and with no other scientific backing, my opinion is that mead likely came first. It’s also likely we will never know since people didn’t write things like this down ten thousand years ago and the actual proof is lost to history. But… it makes sense.

Back to what is mead. Mead at it’s simplest is just honey and water, but, it has the widest range of any alcoholic beverage aside from beer. Yes, even wider than wine. Wine is made from fruit, and with a looser definition some herbs, but it’s limited to sugar since if you add honey, it’s now mead. Mead is everything wine is, plus honey. It can be made with mixtures of sugar types so long as the majority of fermentables are honey. It’s semantic and pedantic, but, true. Beer is all that wine and mead are and more, since barley can be roasted and treated in so many ways.

Now, some might argue that if you make beer with more of the fermentables being honey that it’s no longer beer, but we don’t pander to “those people”. It’s arguable really, but I think beer has more “range” than anything else. By range I mean styles and variety.

Now, don’t get me wrong, mead has a WIDE range of variety. From low alcohol to high alcohol, from dry as the Sahara to sweet as Derica. From simple one note honey to the most complex metheglin fruited and even hopped with barley added and wood aged. Far more variety than I could even mention here with any amount of sufficiency.

Honey is very concentrated sugars. Usually 20% or less of it’s makeup is water. It’s this heavy concentration that makes it not spoil. Nothing can live in that environment, therefore, it doesn’t “go bad”. The act of going bad is caused by bacteria, fungus, and other things that we sometimes use for fermentation.

When you add water, you begin to change that concentration, and eventually it becomes a hospitable environment for things to live in and consume it. This is why when you make mead and add too much honey, it simply won’t ferment. It needs to be less concentrated to be hospitable for the yeast.

Types of mead and where mead is popular.

To be completely honest, mead is so varied that I don’t believe a true accounting of all the types is possible. Where it’s popular is easier… it’s not that popular, yet… again. Mead was very popular centuries ago due to honey being easier to find than grapes and most mead was made in the home. Since grapes and other sugars are cheaper and now wine is mass produced, mead fell out of favor. That is until recently. Meaderies are popping up all over and mead is becoming more mainstream.

As for types… here are just a few things you can do with or add to mead, and this is by no means an exhaustive list:

When you start to consider all those possibilities and the myriad of honey types available, then add in blending of different types, you can see there are LOTS of ways to make mead. This is why when someone says, “I don’t like mead.”. My response is, “You just haven’t found the right one for you yet.”.

Some common myths about mead!

#2 The name “honeymoon” comes from a tradition of a newly wed couple going off to be locked away for a month with as much mead as they can drink. Sorry, as cool as it sounds, that’s a Victorian era invention. It’s just not true.

#3 Mead is dangerous to drink due to methanol. Okay, let’s get this straight once and for all… EVERY FERMENTATION OF ALCOHOL HAS METHANOL. Albeit, in very small quantities. It also just so happens that ethanol (the stuff you want to drink) is the cure for methanol poisoning. The amount of mead, or wine for that matter you’d have to drink to get methanol poisoning is pretty staggering, and likely you’d experience other problems before reaching that amount. Not to mention that there is a LOT more ethanol than methanol so you’re curing yourself as you drink. Oh, and commercial wineries and meaderies have methanol in their products too, no more and no less than homemade.

#4 Mead is hard to make at home and you need lots of specialized equipment and materials. This one… oh this one. At it’s simplest, you can make mead with a vessel of some kind with a lid, maybe some cheesecloth. That’s about it. As with anything these days, you can make it as complicated or simple as you like. Of course there are those that will turn up their nose at anything so simplistic and insist you MUST use the latest doohicky or thingamabob, but… really, you don’t need it. I recommend glass fermenters, airlocks and bungs, hydrometers, autosiphons and good glass bottles. That’s pretty much the basics you need. Now for the “other stuff”. We get accused of being anti-science a lot due to misinterpretation of our methods. There are some things we choose not to use. Sulfites and sorbates. Yep, they are created naturally in our brews and we know this, but… we don’t feel a need to add more. That’s all, just don’t feel it’s necessary. We did a video on probiotics in your food and how they are harmed by preservatives and the like. As for nutrients… you can totally make mead, even great mead, without them. This is a whole other post, but suffice to say just that. I prefer not to use DAP or Diamonium Phosphate, but… in a pinch, we have. I like yeast hulls and even Fermaid O. Natural sources of nutrients for yeast without all the excessive stuff. What happens if you don’t use additional nutrients? Well… let’s be honest, anything beyond a basic honey and water mead has SOME amount of nutrients in it, but if you don’t add more… Well, your yeast can be overwhelmed and not produce alcohol, meaning a stall. They can also produce off flavors that need aging to go away. That’s the gist. I’m a big believer in aging mead anyway so… we’re light on the additional nutrients most times. We are experimenting all the time though, so if something is natural-ish (I don’t like using that word, honestly as the connotations are often misconstrued, but it’s the best term I can think of) and does a good job, yada yada, we will adopt to it. That’s how science works. You establish a method and a theory, then you test them, and if you find a new way of doing it that’s better, and fits within your ethos and ideals, you use it and you grow. Wash, rinse, repeat. I’ll stop now.

As always, thanks for reading and have a great day!

PS We are Amazon Affiliates, so clicking any of our ads and making a purchase of anything from Amazon within 24 hours does earn us a small commission at no additional cost to you. Thank you for supporting us!

Uncategorized
| Tags: Mead, what is mead